I’m excited to launch a new home for the blog:

This  redesign has been a long time coming since leaving Brooklyn, and now NYC entirely. Be sure to update your Google Readers and bookmarks to the new site. See you there! 🙂

Soon I’ll be redirecting all visitors from sherunsbrooklyn.com to the new blog automatically.  So if you forget about the new location, no worries, you’ll get there anyway.

Happy Hour at No Idea Bar in NYC

Last night my office organized a happy hour at No Idea bar in Gramercy, New York City, and we spent the night buying rounds of drinks, reminiscing, and catching up. I really needed all those laughs to store away for when I head back to Texas. There’s great opportunity in far away adventures, but there’s nothing like being home, surrounded by people you love!

Back In New York For a Week

I’m very excited to be waking up in New York this morning! After taking my test in Austin last night, I hopped a cab to the airport, and landed in JFK at around 8:30. When I got to my parents house I found my dad making beef stew, and my mom shuffling me around to show me all the little things that have changed around the house. Pretty standard :).

The parents stocked up on peanut butter, eggs, and greek yogurt in my honor, #winning. In about an hour I’m going to take the train into the city to my office for the day, and then tonight I’m meeting up with my best friend for some long-needed catch up time. I’m so pumped to see everyone I wish I could just blink myself over there like I dream of genie.

I brought my jump rope with me with very good intentions of waking up early and heading outside for a quick workout… but it’s only forty-seven degrees out and that is putting me in shock compared to Austin’s mid-eighties! Instead, I’m about to head into the kitchen for some coffee and mom chat.

Hope everyone has a great day 🙂

A few weeks ago we saw Michael Ian Black at a small venue in Austin, and I grabbed a video of his thoughts on the state. “I don’t get to come to Texas a lot, you know, ’cause there’s no reason to…”

For your viewing pleasure:

The Awesomeness of Oat Bran

Today’s morning was a little flipped from my normal routine. Instead of starting out with my usual peanut butter and jelly on half a piece of bread to get me going before my workout (also known lovingly as pbj-bread), I had an 8:30am conference call to partake in. So I started out with straight up breakfast, instead. And there was no peanut butter involved. I don’t even know me anymore.

I’ve been eating a lot of oat bran lately. Have you ever heard of it? It’s basically like a really healthy version of cream of wheat. You can find it in the cereal aisle, tucked all the way on the end of the hot oatmeal products. I’ve had the Quaker brand, and the Hodgson Mills brand. I like them both: Quaker is creamier and the calorie count is lower somehow, while Hodgson Mills is a little chewy, which makes it fun to eat. Right now I’ve got Hodgson Mills Either way you go, it’s very filling and has really awesome stats: 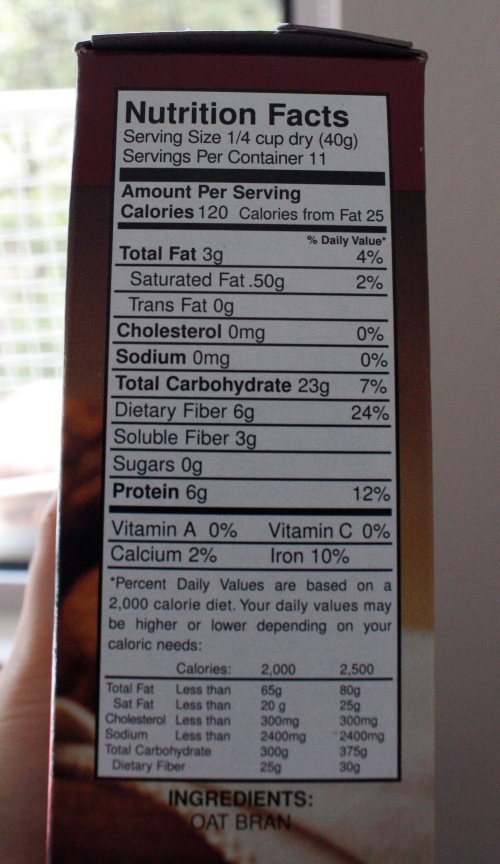 This is a huge picture, isn't it?

I made mine with 1/3c oat bran, 2/3c water, 1 splenda, a dash of salt (all in the microwave for 2 minutes–watch it, it will overflow!), and topped it with raisins and a little coconut butter for some healthy fat.

Get in my belly

The coconut butter is a fancy shmancy topping, I know. I was feelin’ like a fancy shmance one day in Whole Foods, what can I say. If you’re all out of fancy shmance things when you try it, just make it with half water, half low-fat milk (fat + extra protein), and add honey and a little salt and you’ll be all set.

After breakfast and a conference call, my workout today was the Sexy Supremacy bodyrock routine (awwww yeah).  It was a tough workout, and I was grunting in the very small gym, thanking God that all the guys in there were wearing headphones. My grunts are not manly sounding. I probably sound like a kitten coughing.

I found the reverse push-ups to be seriously killer. For anyone who follows bodyrock, here are my reps. The workout consisted of 4 rounds of each exercise in a full loop circuit–40 seconds on, 10 seconds rest:

Now I’m ready for lunch, and it looks like my pbj-bread will never happen today. I’m going to miss that lil’ guy. He’s my fave morning friend.

Dave is a do-er. He is the kind of person who wakes up thinking about the list of things that need to get taken care of, and then knocks them off one by one that same day. He’s the guy who gets home from working late, calls the phone company to take care of a bill discrepancy, and then unloads the dishwasher. He had all of his boxes unpacked the first day we got them. He’s currently hanging a picture on our balcony, after painting the living room wall. His twitter name is even “whatdavedoes,” (he does everything).

I, on the other hand, am the exact opposite kind of person. I’m simply not a do-er.

Before we moved in together, I was certain this was going to drive Dave crazy. I’m a “take-care-of-the-really-critical-things-only” kind of person, an “if-it’s-not-really-affecting-my life-I-won’t-think-about-it” kind of person. I’m a small task procrastinator. I’d rather pay the extra five dollars on my phone bill then spend time calling to clear it up. My twitter name is “melruns-awayfromdoingthings”. Heh.

Dave calls me “melventually,” because eventually…in time… I’ll do it.

Now that we’ve been living together for a month though, I’ve been putting my best effort in: making the bed, going furniture shopping with him every weekend until we had every last thing we needed (who really needs a dresser that badly? Oh..), going to target to get things like an ironing board and a hamper, and buying a duvet cover that we BOTH like, instead of insisting that we use my pink blanket because it works just fine. Why did we have to do everything so quickly?

But the good news (for me) is that the tasks are finally slowing down. We have all of our furniture, our electronics are hooked up, and our things are put away. Our bedroom is looking kind of nice, too. He’s making a good impression on me. It would have taken me months to pull it all together.

I even have my clothes put away in my dresser. A feat that was accomplished within two days. Miraculous. 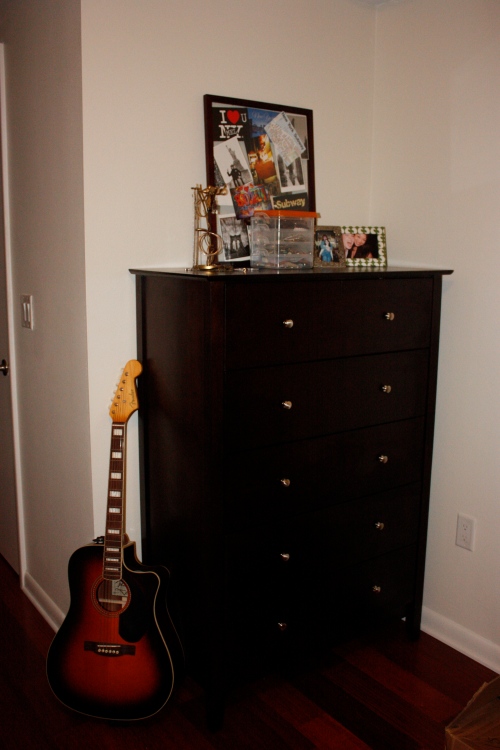 But wait, what are those?

Those are the boxes I just haven’t been able to bring myself to unpack; the boxes that have been staring Dave in the face every morning for two weeks. There are just some things that will never change, no matter how much Dave influences me.

But hey, at least I’ve been changing our sheets.

Are you a do-er? Or an “if-it’s-not-really-affecting-my life-I-won’t-think-about-it” kind of person?

There’s No Such Thing As Upper and Lower Abs

This past Thursday marked my second day attending the PFTA school. Wahoo! The teacher, Mark, got right down to business, jumping into the “Green section” which is all about program design for clients. I was ready to learn how to take someone from couch potato to Arnold! But when Mark started using the proper names for muscles (rectus abdominis? Huh? Dominos? We get pizza in this class?), I knew I had a lot to learn. 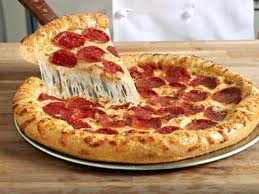 I was never the girl in the gym who spent an hour and a half walking from machine to machine, or doing free weights while standing in front of the mirror grunting (were you?). I was the girl who walked in, jumped on the dreadmill for thirty minutes (like that? dreadmill?) and maybe, on a good day, did some crunches afterward. I know three or four machines, and when I say I know them, I mean I know how to make them work, not necessarily which muscles they are working–two very different things. But that’s okay. That’s why I’m taking these classes: to learn my biceps from my triceps, and my head from my toes.

One of the first things I’m responsible for knowing is just that–the proper names and locations of different muscles and muscle groups, and how to engage them. The first big eye opener for me? There’s no such thing as upper and lower abs! Gah! A myth debunked. Your six pack, the rectus abdominis (not Dominos pizza, bummer) is one long muscle. This means that on my good days after the dreadmill, I wasn’t working my lower abs by doing crunches with my legs lifted off the floor. I was engaging the whole shebang. The whole party. The No Ab Left Behind Act. It turns out there’s actually no way to target just one part of a muscle. Interesting, right?

When I was working my lower abs, I also working supporting muscles that I never even thought about–the hip flexors; a group of three muscles right in the pelvis area. Things like scissor kicks and leg raises are focusing on those muscles.

If I play my cards right, one day I’ll be walking on the beach (I almost never walk on the beach) and hear “Dude, sweet hip flexors, man,” and I’ll say, “Thanks dude, I workout.” Heh. Didn’t you always want to say that?