From Brooklyn to Austin: A Short Story

In one month I will be living in Austin, Texas.

What a crazy statement.

To set the record straight: I’ve lived in New York my whole life. Aside from a four year stint upstate in Binghamton for college, the majority of it was split between Staten Island, Brooklyn, and Manhattan. I’m a New Yorker through and through… but that is about to change.

Two months ago my boyfriend, let’s call him Mave, found himself on the phone with a recruiter from Facebook, talking about the possibility of working for them in Austin, Texas. Why not NYC? Because the job options here are not running aplenty, not for new law school grads, anyway. And rather than being one of the many battling for employment (Hagar viking style battles in those long boats–would you want to do it? i might, if I got the sweet hat), he told Facebook he would consider relocating for the job. He mentioned this to me, and I did it as much justice as I could at the time when anyone drops a passing “Hey, no biggie, but I might work in Texas” bomb on you. “Wow, Texas? Okay, let’s see what happens”. Then I passed out on the floor.

Two weeks after that phone call, after sitting in for an open mic at Pete’s Candy Store in Brooklyn (awesome little spot), we walked up to McCarren Park and decided to try out this new Italian restaurant across the street from the south side. If I could remember the name of it I would advise you to NOT go, unless you like dry chicken that tastes like takeout food. Anyway. Amidst the unappetizing food at the table, Mave asked me if I would go with him if he got the job.

I don’t think he realized what a big deal that kind of question is. He was just throwing it out there as a friend to a friend, like “yo dude, wanna grab a slice?” I think I stared at him for a good minute, and said “Are you asking me to move to Texas with you?” My eyes welled up for a split second, but I totally kept my cool and nodded … “I think so.” Then I passed out on the floor again. When I woke up this time I had a cowboy hat on.

Flash forward to now, and I decidedly ended the lease on my apartment in NYC a month early so that I could move to Long Island and spend time with my family for the month before I go. 90% of my belongings are in a storage container patiently waiting (can boxes be patient? of course) for me to ship them down to Austin. For now, I’m working from my parent’s kitchen via an arrangement with my company in which I will work part time consulting as a Digital Strategist (mostly while staring at my pajama pants thinking, “Should I get dressed yet? Nah…”). From the side of my computer I could hear the channel 7 news anchor telling me today that Texas hasn’t seen less than 100 degree heat in a record breaking 52 days.

That’s cool. I think i can take the heat.

Posted in Moving to Texas, News

My neighbor in this apartment building has it out for me, and as I started recording this song he decided to leave his apartment and slam the door on the way out. While I was singing, I was nervous that he was going to knock on my door and get all fussy at me. Which he didn’t. But as I tried to do a second take to polish the song better, BAM he comes back and slams the door closed even harder than before. Where could the guy have gone? To the bottom of the steps and back? War.

I present: take one :). Written about the feeling a girl gets when a boy calls her beautiful.

A New Song: The Smith

I wrote this while practicing finger picking. I kinda like it 🙂

Testing, testing… it’s been a while.

I honestly debated never posting again. I got the idea into my head that I’ve been writing the same things over and over for more than a year, and that it was no longer interesting. I thought about starting a new blog that let me break out into new topics, with the insight that perhaps “She Runs Brooklyn” had a certain stigma.

Maybe I should keep writing here, and let the blog evolve with me, rather than forcing myself to fit into an old idea?

Am I getting too philosophical? Yeah, probably. But just sayin’.

I am currently sitting in a hotel room in Kansas City watching the ABC Family Channel from a king size bed. This is interesting for a few reasons:

Okay, I’m not really just straight chillin. I’m here on a business trip doing some work in between meetings. I’ve been on a great running kick lately, so while packing for this three day adventure, I threw a pair of sneaks and workout clothes in my suitcase in case the hotel had a gym I could use. Once I got here though, I realized I could just run outside!

Yesterday and today I set my alarm for 5am Kansas time–less crazy than it sounds since my body is on NY time which would be 6am–and set out to run from the hotel. I ran down a street called Nall Avenue, and I’m going to estimate I did a 2.5 mile loop. The avenue is more like a highway to me, as it’s very wide and traffic moves fast, but there were traffic lights which was helpful.

#1 most notable thing from a New Yorker running in Kansas: THE AIR. Holy man, the air. It smells sweet and fills up my lungs like an ocean. It’s times like these that make me wonder what growing up in Staten Island and running there, Brooklyn, and Manhattan have done to my lungs. This is fresh, clean air. Hit me like an acme piano over the head (I could’ve said ‘like a ton of bricks’ right there, but that’s so boring).

Also, for some reason i assumed Kansas would be completely flat, but apparently I’m a naive New Yorker because I hit two hills on these runs. Not monster attack hills, but in comparison to flat Manhattan, my calves and lungs were burning. I also packed old kicks I have because they were a little less bulky than my newer ones, and that was definitely a bad idea. Never run in old, worn out sneakers. You will kill your shins and more.

So, off to find Dorothy and Toto back to my Family Channel tv viewing. Yes, I also like chick flicks and the bravo channel.

Pennsylvania Is A Long State

Monday morning found us in the center of Pennsylvania, in a town called Centre. I hope we were also in the center of Centre, eh? After politely waking up Dave (shaking him until he falls out of bed) we headed out for a run through the area.

Rural Pennsylvania is different than New York City in a million ways, but the one that hit me hardest was the nature of the terrain. We ran down the street from our hotel, saw a sign that said “bike path”, and turned to follow it figuring it would be scenic. BAM. Immediate hill. We both pushed through it to the top, and made it carrying a steady/slowish jog. Once we reached it I was bent over breathing like a madman. Since moving away from Staten Island three years ago, I haven’t had an opportunity to run on anything but 100% flat ground. That hill left me so winded it was both painful and glorious at the same time. Whew!

We continued on through a park, walked a bit, ran back and then sprinted it in to the hotel. I’d guess we ran about 2 miles. Running with a boyfriend rules.

Then we hit the road and had some pre-packed emergency pb&j’s for breakfast. The goal was to reach the border of Lake Erie, and then follow the lake around and cross to Lake Michigan. The biggest city we saw on the map (based on the size of the dots over the cities..) was Erie, PA. We stopped off at a gas station, fueled up, got some beef jerky a.k.a. snack of champions and real men, and then drove, and drove, and drove. We came upon some beautiful landscapes on the way and jumped out of the car to experience them.

The first one was a small row of trees in a huge field in Brookville, PA. There was one old sturdy tree that reminded me of three movie scenes: 1) Forest and Jenny sitting in a tree as kids like peas and carrots, 2) an opening scene in Dances with Wolves when the woman is crying, 3) a scene in Shawshank Redemption when Tim Robbins is burying his tin box under the stone beside the tree.

After this adventure, we hopped back in the car and kept driving for another three hours. I passed out in the passengers seat, and woke up to Dave spontaneously pulling over to the side of the road so we could capture another beautiful scene.

The night ended in Erie, right on the lake. Day of frolicking complete. Next stops: Cleveland to Indiana to Chicago.

Philly Cheesesteaks and a Car

The roadtrip is in action!

Sunday was jam-packed with things to do, starting with me waking up at 5:40am and not being able to fall back asleep (cue the coffee). Dave and I met each other at Penn Station in the city to catch an 8:10 train to Long Island to grab my car.

First stop: Philadelphia! We’ve both never eaten a cheesesteak before (blasphemy), and thought it would be awesome to have the most authentic we could find to start. I asked around a little before we left, and someone told me that everyone goes to Pat’s or Genos, but that those spots are very touristy. Then we got a hint that this place called Tony Lukes was where the real deal cheesesteaks were. So that’s where we went. 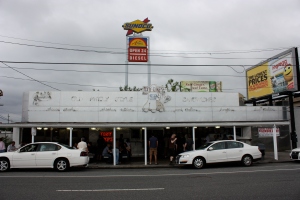 Looks kinda shady, no? We both got a regular cheesesteak with American cheese and onions, trying to keep it classic. 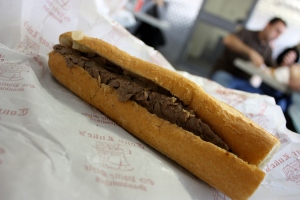 The verdict? Dave loved it. “I could eat five more of these right now.” My thoughts? It was okay. I thought it was a little bland and I dipped it in ketchup.

From there, we figured since we were in Philly we should check out the historic area and see the Liberty Bell. We drove a little further into the city and found a parking lot. Our self-guided historic tour took about 45 minutes. Not bad. One might even say.. the best. 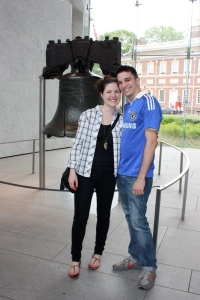 What you can’t see in this photo is the mob of tourists facing us waiting to jump in next to take their picture. Pretty funny. Doesn’t the bell look small?

After seeing the bell and walking around a bit we got back in the car and decided we would just drive as far as we could up towards Lake Eerie. Three hours of fields and fun times in the car later, we stopped in Centre, PA, and got a room at a Ramada for the night. The potential plan for today is to go for a run in the morning (!!) and then head back on the road. Now I just need to wake up Dave :).